Première Blog | Camera Log | 26th of May, 2011
No Usage of Images Allowed in Any Form Without the Written Consent from the owner of this blog.
© 2012 | M. Erwin. All rights reserved

Camera Log: Kassim Slamat & The Swallows
According to my camera log, the last data was clocked on 26/06/2010 at Haji Kassim Bin Rahmat's apartment in Yishun, Singapore. The video recording was made as a follow up from a group interview with a Singapore Pop yé-yé band called The Swallows on 14/05/2010. The Swallows were a popular 5 piece rock band of the 60s which performed to a once-vibrant entertainment industry in Singapore/Federation of Malaya/Malaysia. This blog will serve as the band's fact sheet; facts that have been distorted due to the lack of new and credible information available since their last appearance on youth entertainment magazines, newspapers and television. Two fine examples are Kassim Slamat and The Swallows status as a Malaysian Band (Wikipedia) and video site (Youtube) that labels The Swallows as an Indo Rock band - all of which are contrary to the facts derived from video interviews that were conducted last year. The following contains a short write-up (due to be completed in stages) from the transcripts of a video interview with the band. The Swallows were represented by three out of five former members of the band.
The Interviewees :
Haji Affandi Haji A. Rahman | Drummer (Song Composer/ Leader of the Band)
Haji Yusope Lamat | Rhythm Guitar/Piano - (Music Arrangement)
Haji Kassim Rahman a.k.a Kassim Slamat | Lead Singer
Duration: 01:05:20
THE SWALLOWS EMBLEM
News Update:
On 17/05/2011, the drummer/leader of The Swallows,
Haji Affandi Haji A. Rahman suffered a stroke in Batam, Indonesia.
He passed away at the age of 71.
Posted by Erwin at 10:03 AM 8 comments

My apologies to those who follow this blog -- only 4 people, myself included ; )
No time to update Blog. And so...
I've decided to post these pictures in the meantime, as a reminder ... that there are missing words to be filled in this blog! 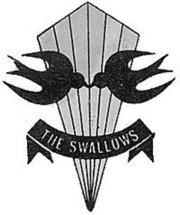 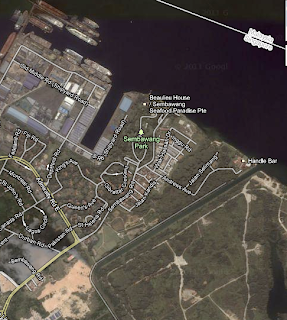 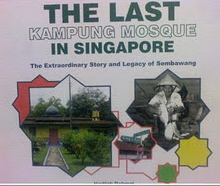 Below is a list of EPs recorded by The Swallows from Kassim Slamat's library that were used for broadcast on the Singapore Airwaves back in the 60s. I believe the existing members of The Swallows have yet to realise that they have some potentially worthy little treasures in their dusty HDB storeroom! 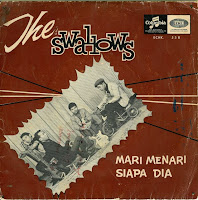 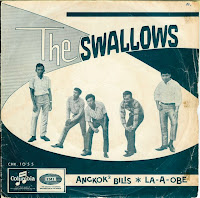 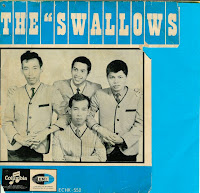 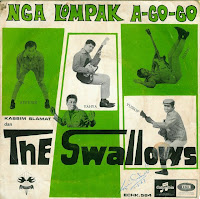 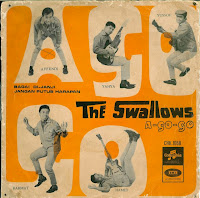 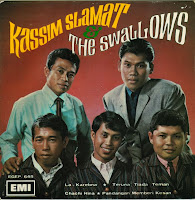 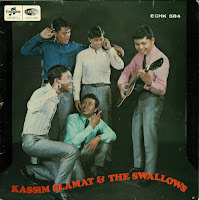 Kassim Rahmat was born on 10 August 1934 at Block 62, Asiatic Workers Accommodation Quarters, (Naval Base) situated at Jalan Kedai. He was among the first generation of children born there. However, in 1951, his father passed away and his family had to resettle outside the Naval Base but were lucky to be allowed the continued use of the amenities at the Naval Base. Subsequently in 1960s, his family moved to Jalan Kerong between Andrews Avenue and Jalan Wak Hassan. Kassim Selamat did not receive any secular education but went to madrasah to receive religious education, but was unable to complete his education there.
At the age of 14, he applied for a job at the Naval Base. Knowing that the minimum age then was 16 years, he added two years to his age in his application. It was only after he was given the job he applied for, that he revealed his true age! Kassim Rahmat worked as a messenger/office boy from November 1948 to June 1951. From June 1951, he was transfered and worked as a trained fitter at H.M Dockyard, Naval Base. He was promoted to engine fitter in 1956 and continued in this position until November 1968. His duties included repairing engines of ships such as the Naval Frigate and Destroyer, and those of aircraft carriers, cargo ships and even submarines. After the Sembawang Shipyard took over from the Naval Base, he was promoted to Special Grade Fitter in 1976 and continued to work there until 1981. Besides an established career at the Naval Base, Kassim Rahmat also pursued his passion - singing. Today, already in his late 70s, Kassim is still passionate about singing. He still performs in public, entertaining the crowds at weddings, birthday functions and trade fairs. Kassim was also credited for participating in several fund raising events across the causeway i.e "Konsert Amal Tsunami 60an" (Tsunami 60's Charity Concert).
Posted by Erwin at 4:27 AM 3 comments

Who Are The Swallows

Yusope Lamat and Affandi Haji A. Rahman formed the nucleus of the instrumental rock group, The Swallows. Formed in 1960, the group name was founded by composer/rhythm guitarist Yusope Lamat when he spotted a flock of Swallows hovering above the community centre near his work place. Together, the duo composed & arranged songs at their rural village; which was located along Andrews Avenue, Sembawang. According to Yusope Rahmat, instrumental songs were very much in favour at that time and local bands went on to emulate popular western instrumental bands such as The Shadows (U.K) and The Ventures (U.S). The band initially started with the name “King Creole” - from an Elvis Presley’s film poster title which they adopted in 1958.
Posted by Erwin at 3:54 PM 4 comments

When Cliff Richard and The Shadows came to Singapore to play at The Gayworld Stadium in 1961, garage bands spruced up all over Singapore to emulate the acts and that event spelt the beginning of a new band set up. Instrumental bands such as The Swallows saw the need for a front-man to take centre stage; akin to what the local audience saw when Cliff Richard fronted The Shadows. During that formative period, popular culture from the west was slowly gaining momentum to spread the band craze among pre-teens and teenagers in Singapore. Heavily influenced by American and British instrumental rock bands, in particular, The Ventures (U.S) and The Shadows (U.K) which began their formation in 1958, The Swallows were joined by Yahaya Galib and Hamid Ba'ahs to record instrumental songs - one of which was called Senandung Malam (Lover's Star) that was composed by the legendary P. Ramlee. The Swallows were a resident backing band at Panggung Negara (National Theatre of Singapore) and fronted popular names such as Rafeah Buang, Andy Young, Ahmad Jais, M. Bakri, Sanisah Huri, Ahmad Daud and P. Ramlee. Later on, during the mid 60s, The Swallows took on a more permanent front-man which gave them a hit song entitled 'La-a-Obē'; a Baweanese song which is still popular today. The song proved to be a timely hit on both sides of the causeway since the departure of a popular crooner by the name of Ahmad Daud.
Posted by Erwin at 3:53 PM 0 comments

A Stint at the Malay Film Industry

In 1965, Ahmad Daud was backed on a regular basis by The Swallows. Ahmad Daud starred in Filipino director, Ramon A. Estella's film entitled Pusaka Pontianak. Despite their inability to read the music scores that were distributed to them; prior to a soundtrack recording session, The Swallows were selected to provide the soundtrack to the black and white film. A song called 'Dendang Pontianak' (Rhythm of the Banshee) from the EP 'Dendang Pontianak | Shake & Twist', which was composed by Singaporean composer/musician Kassim Masdor was one of them. Although the film did not do well at the Box office, the song remains well-acquainted with viewers who have watched 'Pontianak' films from that era. The Swallows were also used by another black and white film the same year. (1965) Directed by Omar Rojik, entitled 'Sayang Si Buta' (Love of the blind) starring Jin Shamsuddin, Sarimah and Dayang Sofia, another known song which was sung by Ahmad Daud and The Swallows were recorded. Entitled 'Si Manis 17', (That Sweet 17) it was used for the film soundtrack and it became one the few renown songs by Ahmad Daud. Ahmad Daud left the band in 1965 for Kuala Lumpur at the height of his filming/singing career and with his departure, a replacement for the famous front-man was needed.

Friends of The Swallows